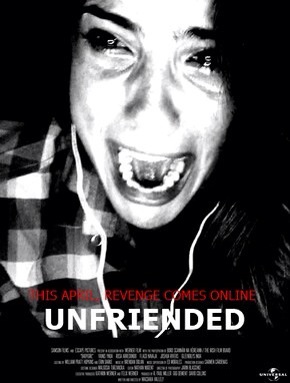 The year has seen a flock of experimental horror movies grace the screen. From It Follows to Good Night, Mommy (released late last year, wide release this year), film-makers have been expanding the genre to include more elements, envisioning new ways to give what would otherwise be a normal jump-scare a new twist. One trend I’ve noticed in the most recent horror movies I’ve watched is the return to basics. This is especially notable in It Follows where director David Robert Mitchell successfully uses placebo to spook the viewer.

Recently, another film joined the aforementioned host of experimental horror movies. Unfriended was catapulted to fame following the widespread release of its trailer, especially (and fittingly) over social media platforms. The film made movie-making history with its narrative being told strictly through social media outlets; specifically, Skype and Facebook.

An adventurous endeavour, I decided to check out the feature directed by Levan Gabriadze. But despite the promising trailer and the hype surrounding the film, I was rather let down by the narrative and the execution.

The tricky thing about making experimental movies is that the gimmick overshadows the content and the narrative most of the time; the execution is more interesting than the actual movie. See, the line between the two is a very fine one. And often times directors fail to maintain the balance between a fresh approach and interesting plot direction.

So what was the case with Unfriended? Let’s break it down.

The fresh faces do a good enough job with their roles, particularly Hennig, who delivers the most believable performance. In terms of characters, I think the downfall of the film is the fact that they are all so distant, one-dimensional, and unrelatable. It feels like there’s a barrier between them and the viewer that keeps the connection (ha, see what I did there? No? Okay..) between both parties rather nonexistent.

Another factor that hinders the relatability of the characters is the speed with which the events of the story start. Everything just begins to happen ten minutes into the movie. And you honestly don’t care when you find out that the super couple of the group is, in fact, anything but because there’s no story there for you to hang on to; no first date, no first kiss, etc. And this is but one example. Maybe eliminating a couple characters and intensely focusing (and tormenting) the rest of the characters would have made the movie a bit more interesting.

Typically, when there’s a barrier that stops people from getting to something, people fail to remember that said something can’t get to them either. As I mentioned above, it felt like there was a barrier between the characters and the viewer, and that barrier served to keep the horror away as well. The thing, I feel, about horror movies that scares people most is accessibility. If people feel like the demon is right there next to them, under their beds, behind the curtain, behind the walls, it’s creepy. But one that is on a screen, one you don’t know enough about to care or be affected simply doesn’t do the job. At the height of her tormenting, ‘Laura Barns’ was just not scary enough. And for a movie that advertises itself as a Horror film, Unfriended doesn’t quite hit the mark.

The film seems like a rough cut of the final version. It lacks quite a bit of polishing in terms of editing, and that comes via discrepancies in details from shot to shot, such as imcorrect dates or inconsistencies in plot details, etc. The film never even addresses a major question about its plot (Um, the events right before the suicide, anyone?). Like Demonic, the story on which the current events of the movie are based on is more interesting. I would have liked to see a bit more of the Laura Barns story. A prequel, perhaps?

Penned by Nelson Greaves, known for jotting down a couple episodes of Sleepy Hollow, the script is predictable. I have to hand it down to screenwriters that stick to horror. I can’t imagine how hard it must be to muster up a story amid a crop of special effects, screams, and gimmicks. Then again, movies like The Exorcism of Emily Rose, Dark Skies, or Sinister have managed to produce scripts and narratives that are as engaging — if not more engaging, like Emily Rose — as everything else going on. Is that the case here? No. In Unfriended, the script doesn’t survive the gimmick. 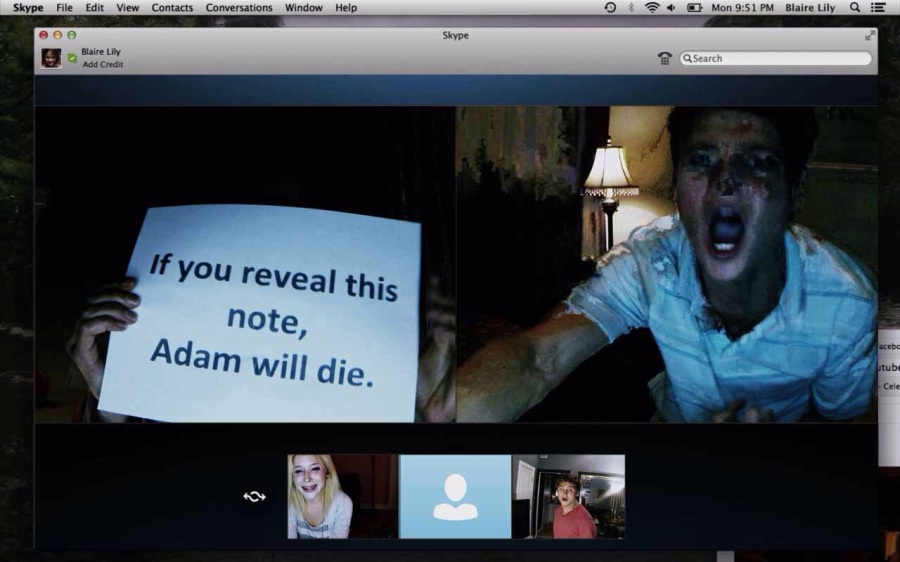 In terms of score, the film successfully makes the Skype call tone a motif for impending death, but otherwise fails to make use of its potential. I could think of some creepy music to support certain scenes. Alas, the score might as well have bot been there.

All in all, it’s an A for effort and innovation for director David Robert Mitchell. To step outside the norm and try to do something different is always commendable. That said, Unfriended lacks the eeriness and allure it needs to make it a decent horror movie. In fact, it lacks the most important element of all: horror.