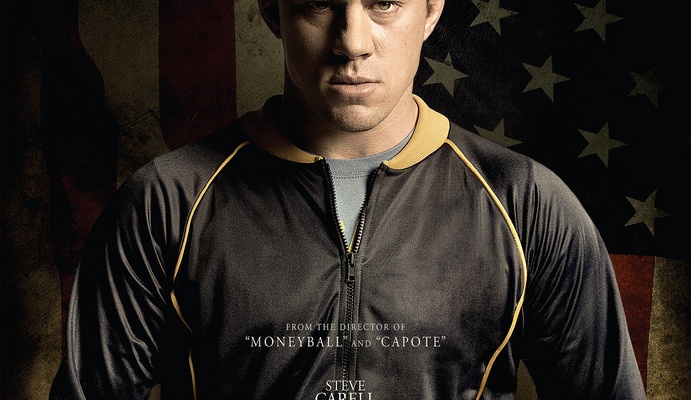 On the morning of January 15th, 2015, the Academy Award nominees for this year were announced (see full list of nominees here) and to my utter happiness, I saw that Foxcatcher — a movie I’d finished watching literally 12 minutes before I watched the announcements live — had garnered an impressive five Oscar nominations.

If ever there was a dark horse to come in and surprise audiences with the number of nominations it had, it’s this one. Foxcatcher is the true story of wrestling enthusiast and multimillion dollar heir to the Du Pont family fortune, John E. Du Pont (Steve Carell), and the events that occured between him and Olympic wrestling champions, brothers Mark (Channing Tatum) and David Schultz (Mark Ruffalo). The film specifically follows a Mark, eager to step out of his brother’s shadow, who gets and accepts an offer to be sponsored and coached by Du Pont while training for the Seoul 88′ Olympics.

Foxcatcher is a characer-driven film. It explores human nature and the human condition in its many forms through Du Pont, a man yearning for the love and approval of his mother who often valued her prized horses more than her son, Dave, a brother somewhat too protective of his younger sibling, and Mark, a young athelete ready to break out and be independent.

Without dispute, Foxcatcher’s best feature is the superb acting. The roles offer all three actors a chance to shine, and they do so brightly.

It’s heart-warming to see an actor with potential take on roles that help him explore that potential. This role does exactly that for Tatum. The actor gives a great performance and embodies a need to detach from what we know — a need we all had at one point or another.

When I heard that Mark Ruffalo was cast for this, I felt a bit iffy about it. Don’t get me wrong, I’ve seen most of this guy’s movies and I love him, but it was a bit strange to picture him as a wrestler. But is that not the beauty of acting? As expected, Ruffalo shines (all the way to an Oscar nomination) as Dave, delivering a performance worthy of his caliber. And with his brilliant work in The Normal Heart, a film about the outbreak of HIV and the activism that ensues, for which he gained countless accolades, 2014 has definitely been one of — if not the — best year in Ruffalo’s career.

That said, the true gem of Foxcatcher was Carell. Hot damn. This is what I love about the industry. Who would’ve thought that the wacky anchor in Bruce All Mighty would end up becoming one of the most talented and most celebrated actors in the industry, given his multiple contributions to TV (hint hint: there’s an office involved) and film? Carell’s physical, emotional,and psychological   transformation for this role come through in what is arguably the performance of his career. His portrayal of Du Pont manages to gain your sympathy and creep you the crap out all in the same. His fixation with Mark, coupled with his need for affection and acceptance provide for ample opportunity to impress, and Carell does so and then some.

If there’s one thing I could comment on, it’s what the movie leaves you with. Like The Wolf of Wall Street, Foxcatcher depicts the story of a man and his trials. And while Foxcatcher makes more of a statement than the former, in the end you’re just left with the knowledge of what happened on Foxcatcher Farm in the 1980s, and not much more. It touches on different elements and themes just enough for them to contribute to the movie as a whole, but not enough to really dive into them and explore them to their ends.

Overall, Foxcatcher is a cleverly-crafted genre film from Miller. And with beautiful imagery and phtography, a captivating score, and gripping performances, it stands as one of the best movies of 2014.