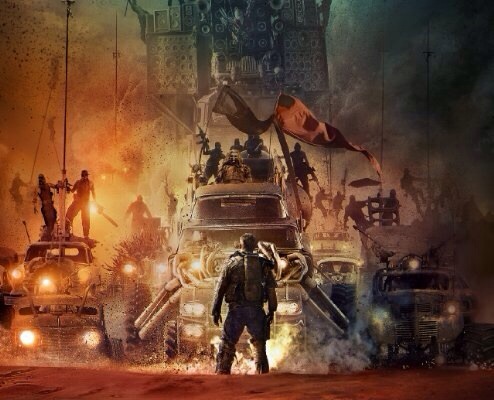 Be it movies or series, this year is definitely the year of reboots. And if you haven’t heard of the reboot of George Miller‘s famous Mad Max franchise, then that must be some rock you’re living under. I say that because everyone has been talking about how fantastic this movie is. So, when I finally got the chance to see it, I understood what the hype was about.

Let’s get this out of the way: this is a visual masterpiece of unmatched caliber this year. It will probably go on to garner Oscar nominations for Visual Effects, Editing, Sound Editing, and Sound Mixing. Even Cinematography isn’t a long shot. And from what I’ve seen thus far, it has a pretty good shot winning a statue or two. But beyond the stunning visuals — and they are breath-taking — there’s something I’d like to shed more light on.

The reboot of the 1979 movie series is titled Mad Max: Fury Road. In a post-apocalyptic Australia, Imperator Furiosa attempts to rebel against the rule of viscious dictator Immortan Joe, and return to her homeland with the help of Max, an outlaw troubled by the ghosts of his past, and Nux, a turned War boy — a minion of Immortan Joe’s.

The film stars Charlize Theron as Furiosa, Tom Hardy as Mad Max, Nicholas Hoult as Nux, and reprising his role from the original franchise, Hugh Keays-Byrne as Immortan Joe.

The actors do a fine job with each of their respective roles. Tom Hardy stars as the reserved Max. While he’s not disposed to much speech, he does more with his presence. And this is a running theme with all the characters. A physically demanding role, Hardy does not disappoint. He brings forth the tanacity that the character is due and exhibits the emotional distress he bears in believable fashion. 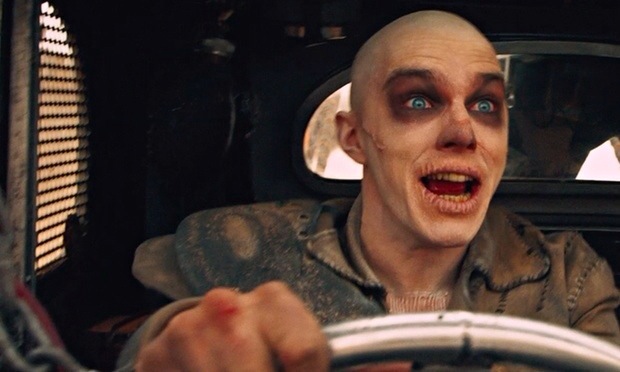 Nicholas Hoult lends his talent in a supporting role. Nux is a War Boy set on securing a place in Valhalla — the Promise Land — and would do just about anything to do so. In the beginning he’s a pest, but one that grows on you as the movie moves along. Hoult successfully helps you make that transition from hating him to liking him. In a dehumanized world, he serves as one of the more human characters, experiencing instances of sacrifice, want, attraction, and loyalty to his newly-found comerades. From Warm Bodies to Fury Road, the actor definitely has an aptitude for portraying the undead, and does so quite well.

Hugh Keays-Byrne stars as a towering dictator, using his acquisition of water as leverage over the people. He is as ruthless as one would expect him to be, and Keays-Byrne plays right into that. That said, I would have liked fo see a bit more of him outside his warlord persona.

The real hero here, however, was none other than Charlize Theron as Furiosa. Honestly, after watching the film, you start to wonder why this wasn’t called Furiosa instead. Alas, our phallocentric cinema (at least we get Fury Road. Get it? Fury…Furiosa? No? Okay.). She absolutely steals the show, and she doesn’t even need words to do it. With Theron, a simple gaze said it all. Her performance was passionate, leading, and fierce. The film was driven by her performance which was both physically and emotionally demanding. And Theron delivers masterfully on all scales. The film was one you’d normally see being spearheaded by a male lead, so this comes as a supremely refreshing turn. Furiosa leads the runaways like a true leader, giving part of herself to the audience.

The film was directed by George Miller, who also directed the original franchise. This time around, Miller’s style triumphs quite loudly. He reinvents the action genre with unbelievable panache,  direction, and visual fortitude. The camera angles and work on editing were especially great, making already spectacular action sequences all the more great. Again, I wouldn’t be surprised if he nabs an Academy Award nomination for his direction. For now, I’d place him in my top picks for Best Director. But the Fall season looks like one of most promising. So, you never know.

What I loved about Fury Road was the world it created for the viewers: the Wasteland. It was fully of the most random things, but with each you grew more interested. Props to the production designers for creating a visual world that was quite fitting for a post-apocalyptic Australia.

The hair and make-up team also do a great job with the looks of the characters. From the War Boys to Immortan Joe himself, the characters definitely looked the part, and that’s thanks to a team of 47 make-up artists who pitched in.

The score of the movie was good, especially the main sequence. I can’t comment on the music without addressing the weirdass guitar player in front of the monster truck. He was so perfectly random, and I couldn’t get enough of him. As my friend (who was watching with me put it): “wou bekhsous the guy with half a bloody face 3am yde2 men kel albo” (what was with the dude with half a bloody face playing with all his heart?).

If there’s one thing I disliked, it was the narrative. It just didn’t do it for me. It was supported by this enthralling mesh of theatrics and stunt work that kept me glued for the entire two hour run, but then just led nowhere satiating, although I thought the concluding scene was interesting. Through its script, it tries to make the film an inward look into a hopeless man, it stagnates there. It would have been interesting to delve far deeper there.

Mad Max: Fury Road is a stunning work of art from the visual perspective but could have had a stronger narrative. Powered by fantastic performances from its cast, especially Charlize Theron, the film is definitely worth a watch. With a sequel slated for release in the coming two years, I only hope the franchise evolves into something special. One thing is certain: Action is back.