Sometimes, I pick up a random movie to watch hoping it’ll be good. And sometimes it is (see: Who Am I – No System is Safe). Other times, however, it’s See You in Valhalla.

Primarily starring Sarah Hyland, Bret Harrison, and Michael Weston, See You in Valhalla is a drama about the estranged Burwood family that comes together following the bizarre death of one of its own, brother Max, also known as Magnus. The film follows Johanna Burwood (Hyland) in particular as she attempts to reconcile her past with her present.

Hyland does a very average job with her character, shining at times and utterly failing at others. From the very start, her so-called grief over her brother’s death is so passive, it’s almost like her favourite toy got lost. In later scenes, however, she proves more capable of handling her role. In any case, the role itself was lackluster. The combination of an edgy millenial and a child forced to grow up overnight did not mesh well; one scene she was all grown up, the next she was acting like she was in a lifetime movie.

Michael Weston does a much better job. In fact, he delivers the best performance of the movie. He plays uptight brother Don, father to daughter Ashley (who needs to seriously get an attitude check. Child is a product of mainstream conservatism. She could almost pass for a republican, even!). In the beginning, he comes off as the most arrogant, self-centered character. As we go on with the movie, however, we start to see the little boy who grew up without the love of his father trying to be anything but to his own child. Towards the end, Weston showcases his talent in one monologue that wins him the movie — acting wise.

The rest of the cast does an okay job. The problem is that the characters are just so distant. The movie features a character named Pete (Alex Frost) who plays Johanna’s love intetest — except he comes off as an unwanted friend following her everywhere instead of someone she’s dating, but I digress. In the movie, he’s just thrown into this family’s endless string of messes and that’s what it actually feels like to watch See You in Valhalla. The characters seem to have their own issues with you awkwardly watching. Voyeurism? Perhaps. But it’s one of the movie’s biggest flaws (if you exclude every other factor of the movie). 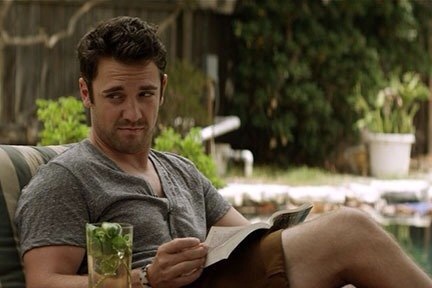 The script is dreadful. It’s got every line in the book when it comes to abandonment (“Where were you when I was graduating? When I got married?” Bla bla bla). And the characters are written to be as flat as the road, save for Don, who bears a shred of emotional depth. And another thing: the Viking references. Ibne, I understand if you want to frame the movie around the idea of vikings (in a bad way at that), but at the very least, at the very, very least, the writers should do their best to explain what the heck they’re on about. It’s like people having a conversation about something you know nothing about, and it’s just like:

The film feels like a Disney movie where the gang of siblings eventually come together in the end with all the little birdies and the little monkeys (Mean Girls represent!). Yay. How did I watch all 90 minutes of this?

Finally, and I’ve kept the worst for last, the movie had every possible cliché scenario you’ve ever seen. I shit you not. This isn’t just an unoriginal movie, it’s the mother and father of all unoriginal movies that insist on disrupting our daily lives. You had the estranged siblings, the artist sister who’d given up a child as a teen, a suicidal drug addict, a neglecting father, an uptight older brother (who also had a child in his teens. Seriously, people. Condoms. Use. Condoms.), the ex-boyfriend played by Beau Mirchoff (who’d had…YES YOU GUESSED IT…a child with another girl as a teen), the wise Hawaiian boyfriend who was such an advocate of Ohana you’d think he walked out of the Lilo & Stitch set, not to mention the abuse of the respected concept so much. Hello, cultural appropriation! Anyway, you get my point.

On an up side, and this might be the only thing the movie’s got going for it, the soundtrack is pretty great for this sort of movie. I found myself trying to find a couple of the songs that were used — always a good thing!

See You in Valhalla might have sounded good on paper (I say might quite lightly), but the execution was a mess of ill-developed characters, horrible writing, endless subplots, unrealised storylines, and average acting performances. Spare yourself the 90 minutes watching this movie. It’s fugly.