On Sunday night, the 73rd annual Golden Globe Awards took place and crowned many a talented actor and actress in a multitude of category-based awards. The night featured as many surprise wins for first-time nominees, like Rachel Bloom, and the return of veteran actors and actresses, like Sylvester Stallone and Kate Winslet to the winner’s circle. But the shock of the night came mostly in the movie categories. The Revenant and The Martian walked away with top honours while expected Oscar frontrunners  Mad Max: Fury Road, Carol, Spotlight, and The Big Short walked away empty-handed.

While some films lost for obvious reasons (two actresses in the same category for Carol, for instance), other come as quite a shock. It isn’t uncommon, though. 2008’s The Hurt Locker walked away empty-handed from the globes, and went on to win six Oscar, including Best Picture and Best Director, thereby crowning the first female winner, Kathryn Bigelow. One such example this year is Best Picture favourite Spotlight, which came up short on Sunday night’s Globes.

Helmed by Up scribe Tom McCarthy, Spotlight is the telling of the Pulitzer Prize winning investigation of the child rape and subsequent cover-ups within the ranks of the Catholic Church that shook the city of Boston in 2002. The film stars a host of award-winning stars including Mark Ruffalo, Michael Keaton, Rachel McAdams, Liev Shriber, John Slattery, Brian d’Arcy James, and Stanley Tucci.

In films with numerous central characters, it’s often hard to have a healthy balance between a good performance as an ensemble and powerful individual performances from those involved. It’s usually one or the other, such that some films boast stronger performances  from its individuals rather than its cast as a whole (12 Years A Slave), and others do the opposite and give great performances as a cast without its elements shining much individually (Lord of the Rings). Few movies manage to combine both, such as American Hustle and True Grit, and Spotlight does exactly that, delivering a formidable ensemble performance as well as captivating lead turns.

Mark Ruffalo, Michael Keaton, and Rachel McAdams are to be noted here. Ruffalo is an actor generally admired, and for good reason. He continues to turn heads with his roles, and is no different in Spotlight. His take on passionate, workaholic Mike Rezendes is the best individual performance in the movie, and one that has already garnered him an Oscar nomination for Best Supporting Actor.

Ruffalo is not alone in his nomination, as McAdams was also nominated for her first Academy Award for her work in the film. While the actress is convincing as Sacha Pfeiffer, I wouldn’t go as far as nominating her over other actresses who could have shined this year. The nod in her favour certainly isn’t upsetting, but it comes as a surprise in a very crowded race. 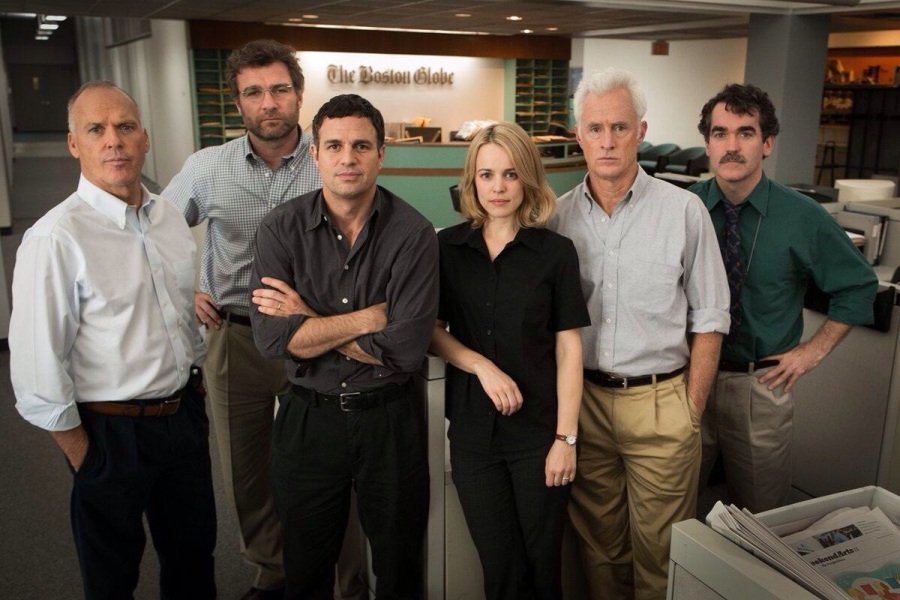 Keaton follows up his Oscar nominated work in Birdman as an investigative journalist and a Boston nationalist set on discovering the truth behind the town’s best kept secret. His is an emotional and more physical delivery that constantly leads us to believe that his character knows more than the viewer, whether it’s in his bizarre statements or physicalities and mannerisms.

Aside from the cast, the film’s strongest element is its script. Josh Singer and Director Tom McCarthy serve as screenwriters of what is arguably one of the best scripts of the year, and the potential Best Original Screenplay winner come February. From the lines to the pace to the structure of the film and the development of its plot and characters, the script keeps the viewer glues to the screen anxiously wondering what will happen next. the pace in particular is noteworthy, as each scene gives the viewer something to ponder on. It all culminates in a closing scene that is brutal as it is satisfying, creating one of the most memorable moments in film this year.

Camera work is fantastic in the movie as it creates the atmosphere of intensity. The more the plot unravels, the more intimate the camera work attending the central characters gets in an attempt to underscore the secrecy of it all. The direction of the film is something to behold, thanks to McCarthy‘s talent (how his were the same hands that made The Cobbler, I still don’t know. But this marks quite a step up from that).

One element of the movie that suffers is the score. Music can truly make or break a film. It adds an emotional layer to a film that elevates the overall effect of some scenes. In Spotlight, the emotional and moving content is present, but the score that accompanies it does not serve it greatly. It’s lack os nothing to scorn, but imagining the haunting scores of some industry greats to Spotlight is nothing short of exciting.

Another thing the film could have done differently is the cinematography. The lighter colour filters and faded gradients weren’t very consistent with the film’s dark subject matter. The juxtaposition doesn’t make a lot of sense in terms of the final product, which is why a visually darker film would have probably added much needed grit to the film.

Tom McCarthy’s Spotlight is a fantastic genre movie that captivates from beginning to end. It boasts a star-studded cast, great performances, and a terrific script worth celebrating. It even stands a chance that Best Picture statuette.

6 thoughts on “On the brutality of truth: ‘Spotlight’ recounts Pulitzer prize winning investigation”